Tuntun is much more than a book, is a social impact project based on a children’s picture book written by Anya Damirón and illustrated by Pablo Pino.

The book promotes inclusion and bravery with a fun-filled story full of action and colorful illustrations. But at the end, readers discover that almost all African wild animals they just saw are endangered, vulnerable or threatened species and we invite them to visit our website, motivating them to learn about all the wild animals that need our help, giving them an option to Do something about it.

In here they will find: interesting facts about animals in an attractive way for the children, an animated video of the complete story (with original music), worksheets, coloring pages, a guessing game, a list of tips for us to help in our daily life and information about the first community sanctuary in Africa, www.retetielephants.org with a direct link to donate directly to the cause.

We want to take readers a step forward. This website will be an ideal tool for children to learn more than the sounds of their favorite animals and to be aware of the impact we have on the preservation of all these wonderful species. The book will be published in Spanish and English, by Algar Editorial, both in America and in Europe, and will also be published in two versions of Catalan by the Spanish publishers Bromera and Animallibres.

To create this project, a team of very special people are working together, many collaborators and an European publisher with a wonderful journey that will publish our book in several languages. You can find a little bit about all of us here: 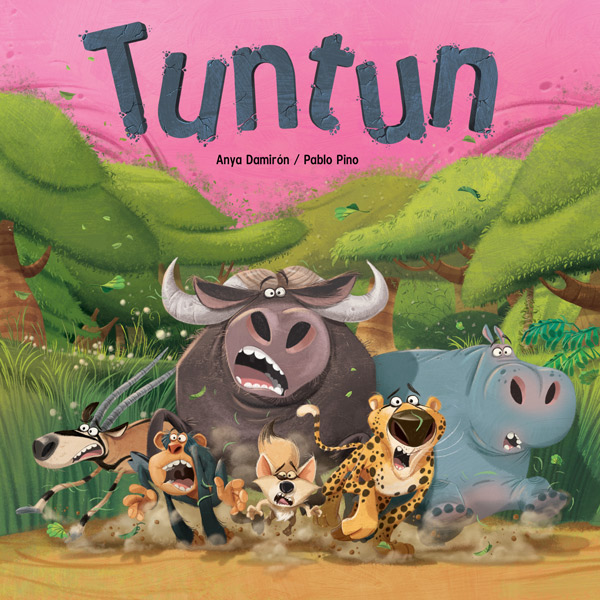 Tuntun is huge but he doesn’t know it. His footsteps scare all the other animals of the jungle, who think of everything before being brave enough to face the truth. Tuntun, reminds us that many times, things are not as we think.

A daring wasp realizes what is really happening and takes action in an unexpected way, causing an accident that changes the jungle completely. Things are never the same again. Tuntun  gets to know all the animals, discovering that he is not alone in the world and the animals begin to live wonderful adventures with his new friend.

Tuntun represents everyone who is a little different, all those species in danger of extinction, which are gradually disappearing. It represents with its greatness those who feel lonely in the world, who are judged by their appearance and those who wish they had an opportunity.

Tell us where you are: